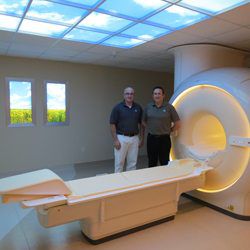 LEARN ABOUT OUR NEW MR SCANNER!

MRI uses a powerful magnetic field, radio frequency pulses and a computer to produce detailed pictures of organs, soft tissues, bone and virtually all other internal body structures. The images can then be examined on a computer monitor, transmitted electronically, printed or copied to a CD. MRI does not use ionizing radiation (x-rays).

Detailed MR images allow physicians to better evaluate various parts of the body and determine the presence of certain diseases that may not be assessed adequately with other imaging methods such as x-ray, ultrasound or computed tomography (also called CT, or CAT scanning).

Currently, MRI is the most sensitive imaging test of the neurological disorders related to the head and spine (particularly in the brain) as well as injury and disease related to the joints such as knee and shoulder.

What are some common uses of the procedure?

MR imaging of the head, spine, and joints is performed for a number of abrupt onset or long-standing symptoms. It can help diagnose conditions such as:

How does the procedure work?

Unlike conventional x-ray examinations and computed tomography (CT) scans, MRI does not depend on ionizing radiation. Instead, while in the magnet, radio waves redirect the axes of spinning protons, which are the nuclei of hydrogen atoms, in a strong magnetic field.

The magnetic field is produced by passing an electric current through wire coils in most MRI units. Other coils, located in the machine and in some cases, placed around the part of the body being imaged, send and receive radio waves, producing signals that are detected by the coils.

A computer then processes the signals and generates a series of images each of which shows a thin slice of the body. The images can then be studied from different angles by the interpreting radiologist.

Frequently, the differentiation of abnormal (diseased) tissue from normal tissues is better with MRI than with other imaging modalities such as x-ray, CT and ultrasound.

What will I experience during and after the procedure?

Most MRI exams are painless. However, some patients find it uncomfortable to remain still during MR imaging. Others experience a sense of being closed-in (claustrophobia). Therefore, sedation can be arranged for those patients who anticipate anxiety, but fewer than one in 20 require it.

It is normal for the area of your body being imaged to feel slightly warm, but if it bothers you, notify the radiologist or technologist. It is important that you remain perfectly still while the images are being recorded, which is typically only a few seconds to a few minutes at a time. You will know when images are being recorded because you will hear tapping or thumping sounds when the coils that generate the radiofrequency pulses are activated. You will be able to relax between imaging sequences, but will be asked to maintain your position without movement as much as possible.

You will usually be alone in the exam room during the MRI procedure. However, the technologist will be able to see, hear and speak with you at all times using a two-way intercom. We allow a friend or parent to stay in the room as long as they are also screened for safety in the magnetic environment.

Our technologist will offer earplugs to reduce the noise of the MRI scanner, which produces loud thumping and humming noises during imaging. Children will be given appropriately sized earplugs or headphones during the exam. MRI scanners are air-conditioned and well-lit.

How Should I prepare?

If you have claustrophobia (fear of enclosed spaces) or anxiety, you may want to ask your physician for a prescription for a mild sedative prior to the scheduled examination.

Jewelry and other accessories should be left at home if possible, or removed prior to the MRI scan. Because they can interfere with the magnetic field of the MRI unit, metal and electronic objects are not allowed in the exam room. These items include:

In most cases, an MRI exam is safe for patients with metal implants, except for a few types. People with the following implants cannot be scanned and should not enter the MRI scanning area unless explicitly instructed to do so by a radiologist or technologist who is aware of the presence of any of the following:

You should tell the technologist if you have medical or electronic devices in your body, because they may interfere with the exam or potentially pose a risk, depending on their nature and the strength of the MRI magnet.

In general, metal objects used in orthopedic surgery pose no risk during MRI. However, a recently placed artificial joint may require the use of another imaging procedure.

You should notify the technologist or radiologist of any shrapnel, bullets, or other pieces of metal which may be present in your body due to accidents. Dyes used in tattoos may contain iron and could heat up during MRI, but this is rarely a problem. Tooth fillings and braces usually are not affected by the magnetic field but they may distort images of the facial area or brain, so the radiologist should be aware of them.

Those who accompany patients into the scanning room also need to remove metal objects and notify the technologist of any medical or electronic devices they may have.