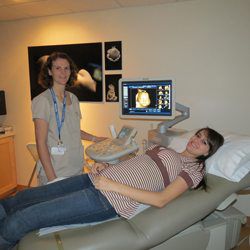 What is Ultrasound Imaging?

Ultrasound imaging, also called ultrasound scanning or sonography, involves exposing part of the body to high-frequency sound waves to produce pictures of the inside of the body. Ultrasound examinations do not use ionizing radiation (as used in x-rays). Because ultrasound images are captured in real-time, they can show the structure and movement of the body’s internal organs, as well as blood flowing through blood vessels.

Ultrasound imaging is a noninvasive medical test that helps physicians diagnose and treat medical conditions.
An abdominal ultrasound produces a picture of the organs and other structures in the upper abdomen.

Obstetrical ultrasound provides pictures of an embryo or fetus within a woman’s uterus, as well as the mother’s uterus and ovaries.

Doppler ultrasound is a special ultrasound technique that evaluates blood flow through a blood vessel, including the body’s major arteries and veins in the abdomen, arms, legs and neck.

In addition, thyroid and breast as well as muskoskeletal and male and female pelvic structures are often evaluted with ultrasound imaging as well.

What are some common uses of the procedure?

Abdominal ultrasound imaging is performed to evaluate the:

Obstetrical ultrasound is a useful clinical test to:

In women, a pelvic ultrasound is most often performed to evaluate the:

General ultrasound is also used to guide procedures such as needle biopsies, in which needles are used to extract a sample of cells from organs for laboratory testing.